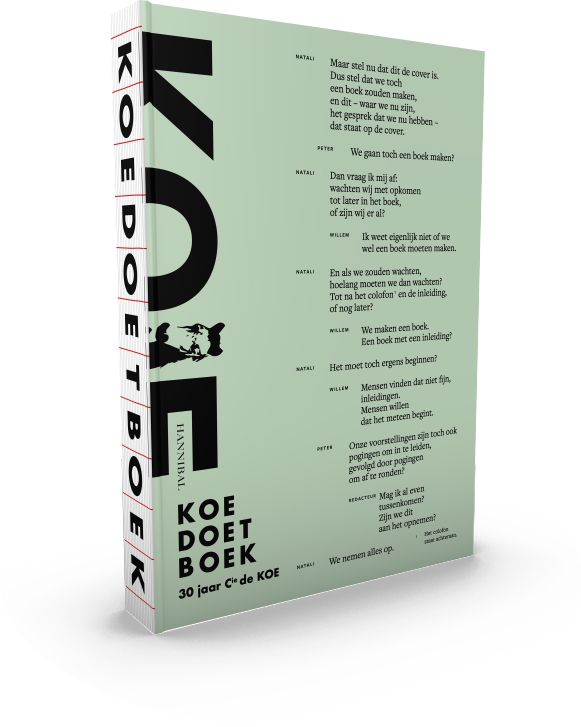 After 30 years of playwriting, we finally try our hand at a book! A book which asks the question how de KOE would make a book, a play on paper, an erratic and surprising work in which Peter, Natali and Willem - together with their co-author and editor Wannes Gyselinck - offer you a unique look at their philosophy and way of working. In short: a jubilee book only de KOE could have made. About everything we've left behind, and everything we've failed to leave behind. Leaf through pictures from thirty years of de KOE-pieces, finally get your hands on the - never before published - text of our first show, De Gebiologeerden, or get started yourself with the 'Vademekoe', a DIY-manual based on 40 frequently asked questions.

KOE DOET BOEK is sold after our shows (to be paid with cash or payconic), in selected book shops, and via www.dekoe.be. Reserve your copy now via this form. (Dutch only)

The only book that the KOE could write, or so you make me believe effortlessly, so wonderfully different and unique and right. I laughed, laughed loudly, rarely happens to me with a book, and I also shed some tears, enfin,le tout, but it also makes you feel like living a little better, of course not in a moral sense, just as a practitioner of life. That is quite something. (Guinevere Claeys)

Form and content merge seamlessly: KOE DOET BOEK is a book that reads like a play of de KOE, which had started before you were ready for it, constantly reformulates and questions itself, and in which interesting insights take you by surprise. (Sander Janssens, Theaterkrant)

Rather than a classic anniversary book, it's become a gem of an art book that brings tears of laughter to your eyes. (Magali Degrande, Het Nieuwsblad)

Can you counteract the fleeting nature of theater with a book? The Flemish company de KOE makes an attempt, now that they are celebrating their thirtieth anniversary. KOE DOET BOEK is the resolute title, and it's become a beautiful and special book.(Ron Rijghard, Cultuurgids NRC Handelsblad)

KOE DOET BOEK truly feels like a play, but in the shape of a book. The characteristic meandering, ironic and jazzy style of De Koe, in which the actors often talk next to or through each other, also has an effect on the lyrics thanks to typographical quirks. [...] As a reader you get insights, enjoy the translation from theater to book and often have to laugh. (Filip Tielens, De Standaard)