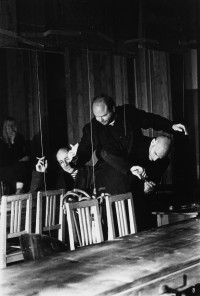 Three thespians (Damiaan De Schrijver, Matthias de Koning and Peter Van den Eede) from three companies (tg STAN, Maatschappij Discordia and de Koe) defy the laws of the theatre and of their own craft to boldly adapt Diderot's Paradox of the Actor .

In vandeneedevandeschrijvervandekoninganddiderot they examine illusion in the theatre, the actor's identification with the character and the need to model oneself on an example found in nature. Is Diderot right? Is Diderot wrong?

'The hand slid over a smooth surface; but the eye, being compelled (caught in a spell), perceives an irregularity, in such a way that one could ask the philosopher which of the two conflicting impressions (which of the two meanings) is the true liar.'

vandeneedevandeschrijvervandekoningendiderot was nominated for the 2002 'Theaterfestival'. In the autumn of 2003 was created a French version, du serment de l'écrivain du roi et de diderot , which was performed in France (a.o. at the Paris 'Festival d'Automne') and in Canada.